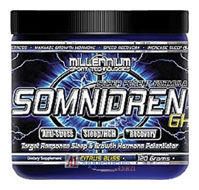 How Does
Somnidren Compare?
Click Here To See The Reviews


Somnidren is a human growth hormone releaser product in powder form. Intended to be taken at bedtime, its main touted benefits are better sleep and decreased stress in addition to the uptick in production of HGH within the body. The ingredients of Somnidren exclude anyone with sleep apnea, anyone who drinks alcohol, or anyone taking one of a long list of common medications, among many others.

The very fact that the “Who should NOT take Somnidren?” list of exclusions provided by the manufacturer is as long as it is should cause some concern in anyone looking to use this product in an effort to improve their health. Though Somnidren includes proven HGH releasers such as mucuna pruriens, the inclusion of 4-Amino-3-Phenylbutyric Acid, or phenibut, to improve sleep and decrease stress quickly eliminates the product as a reasonable possibility. Almost as an afterthought when compared to the risky ingredients, the Somnidren powder must be dissolved in water and ingested as a beverage, putting a large portion of at active ingredients at risk of simply being passed through.

Somnidren contains two human growth hormone releaser ingredients - GABA and mucuna pruriens. In addition to some other minor ingredients such as vitamin B-6, magnesium and zinc, the ingredient that sets off warning bells is one called phenibut. Included to deliver on the promises of better sleep and improved mood, phenibut is a drug used in other countries to treat such disorders as anxiety and insomnia. In a different concentration, phenibut would be considered an extremely heavy neurological drug. Its inclusion and concentration in Somnidren is enough to raise serious concerns about taking the powder long term or even at all.

Somnidren is available through several different online retailers. Since each distributor will have its own specific free trial, shipping and return policies, consumers should do some comparison shopping before purchasing. Surveying several different online retailers, the average price for a single jar of 120g of Somnidren powder is $30, plus applicable shipping and handling charges.

While there is some initial increase in production of human growth hormone with Somnidren, the addition of phenibut to the ingredients makes this product impossible to recommend. Aside from the long list of people excluded from taking this pill, even those in excellent health should seriously consider the fact that phenibut is sold as a neurological drug in some countries, though it is not approved for such purposes in the United States.

The ingredients of Somnidren are an impressive mixture and it is true that when combined with phenibut, there will be some initial good results seen. The phenibut will briefly induce better sleep and mood. However, the human body quickly adjusts to the effects of phenibut, rendering it useless very shortly, and people going off of phenibut can suffer very uncomfortable withdrawal symptoms. Though Somnidren will induce some mild results in short order, the inclusion of phenibut makes this a very questionable product.